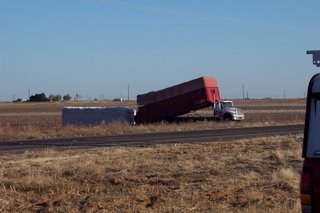 I am sitting out in the driveway listening to the bee’s, window fan, train, highway, and the sound of approaching vehicles that are well over a mile away. There is an occasional near silence when the sounds of life nearby infuses the air with its hum. A group of leaves fell from the pecan tree that is over the garage with a deafening crash. The birds and bugs are beginning their sunset symphony. This was a record heat day here in Midland with it reaching eighty eight or nine degrees. There isn’t a cloud in the sky and wasn’t one yesterday either so it is cooling rapidly now. As soon as the sun got low it started dropping. 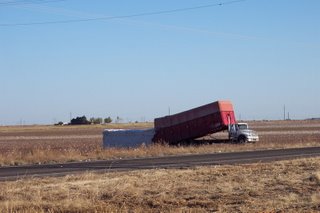 The bees worked all day to find a way under the house and eventually did. It was a squeeze evidently because not many were coming through. I saw how they had cleaned the remains of the hive I had dropped in the dirt and got to thinking. These bees obviously know how to detect honey and will take it away so…What if I just opened it up and let them clean it out? They’d pick it clean from what I saw, so does that mean my problem would be solved? As long as there is honey down there bees will try to get to it. We saw Chuck and his wife downtown in Stanton. He told of the honey bees they had in the big tree they had to take down, how they swarmed and left the hive behind. Would another swarm find this spot and come in? Got to work this out in my mind to decide what’s best. 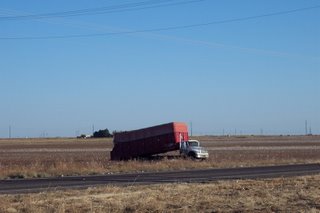 Cherie took this series of pictures showing how they pick up the cotton.

I’m tired. Cherie went to the quilt show. I wasn’t into it so opted out. That was no surprise to Cherie. I hope she meets some friends here. It would help her allot.
===========

11/11/06 Saturday
Yesterday Paula, the lady with the Farm Bureau, came out to inspect the house in order to get us a quote. From our conversation it seems likely that their rates will definitely beat out State Farm. When we got quotes from State Farm we went into shock. Who would have thought car insurance would go up when you move into the boonies. Paula said that they take into account things like running into deer but also the big hailstorms and occasional tornado effect rates out here. Similar to the rates being higher where the hurricanes hit last year.

As we talked of course we told her our story. This time I let Cherie do the talking, partly because it is interesting to hear Cherie’s view of this. It always touches who we tell it to.

We were expecting to have Virginia come out but she didn’t make it. We need to get her the farms property tax papers so this estate can be closed. There isn’t much left of the money now as Virginia disbursed most of it but every little bit helps. Besides I just want it finished so it’s one less thing to deal with. I had offered to run the papers out to her because it is at least an hours drive and would make things easier for her but she said she’d run them to us. We would love to see her and I’d like to show her what we want to do with the place. 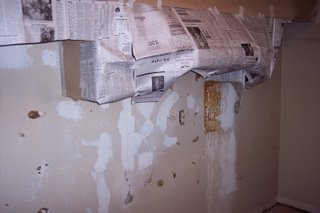 Cherie and I worked hard on the kitchen to get it ready to paint and lay the tile. We pooped out by 5:00 or so, just ran out of steam. I patched many of the holes and this morning we will sand that down. I just measured to buy some new base board and trim. It would be a big help to have a compound miter saw but the budget won’t allow that so I’ll do it the old fashioned way with a hand saw.

I did pick up a circular saw on sale in Toledo. In fact I have done a fair job of collecting the tools we will need on this house. Considering that I owned only the clothes I could carry in a garbage bag when Cherie and I got back together it is amazing how far I have come. There is no question that I am blessed and I continually wonder “Why me?”. In my mind I deserve none of this good fortune and still ponder about how things have, and still do come together as if orchestrated by an outside hand. Is there a God? I don’t know but daily ask for him to show himself to me.

We’re going to head into town now to get what we need for the kitchen. I had to scrape the entire floor by hand to remove the crud that had built where the joints of the old tile had been. Hopefully the kitchen will get finished today. Then we can start getting things organized and move the fridge on in. It will be the first area finished.

I opened the crawl space access yesterday to let the honey bees clean out what’s left of the old hive. It is always good to learn how to work with nature. There is no doubt these guys will clean it much better than I could, in fact they will pick it clean. We will have to watch in case another group of bees try to make this their home.

Cherie took some pictures of the farmers picking up the bales of cotton. It is fascinating to watch, at least for us city types to whom this is novel.

It’s already 2:00. We came to Midland to pick up some wood trim for the kitchen. While here we stopped by some of the cellular companies to investigate their services and prices. So far Alltell is at the top of the list. Getting a PC card that allows us to go online is one of the biggies we’re looking at. It would entail getting a phone line just for that. It will all boil down to the money. We are going to be careful to make sure our regular monthly expenses will fit into our budget, which is based on my pension for now. For now we’ll use the Wi Fi at the hotel or other hot spots.
Posted by Bob Westbrook at 12:13 PM

Crumbs, it looks a bit bare out there - I'm used to a few more trees and hills and things!