Life gets in the way 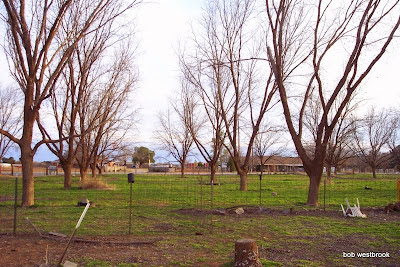 ...2/13/12 Monday
The weeks seem to fly by. Hard to believe it’s already Monday. We had moisture yesterday. It came in the form of some snow, and then sleet. I’ll be scraping ice off Cherie’s truck this morning. It was pretty cold the last two days and I had to go get some more firewood as we already burned what I had gathered for the winter. The latest person God has found for us to help needs wood cleaned and cut from her now dead pecan orchard, just another example of how our needs are met, through helping others.

Today I plan to work on that 1929 Ford truck. The starter is fried so it got sent out for a replacement. I was blessed with a trailer to use for cleaning up the land of that person we are helping. There is lots of work to do there and some of it involves heavy lifting I am not capable of. A way will be provided, of that I am sure. She has some old vehicles out there that need to disappear. I looked carefully at them, hoping they would be worth working on but I don’t have the time or money to do so. The insides of all vehicles are trashed, from Texas heat and sun to rats, the damage is done. 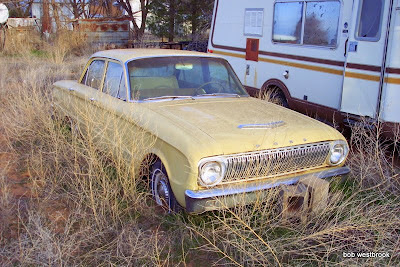 This Ford Falcon is in great shape as far as the body is concerned. I think it’s a 1961 model. She doesn’t know where keys or titles are for any of these are, but they can be acquired. Most of the tires are flat so moving them will be a definite contest. The trailer I have isn’t heavy enough to haul a car or truck. Even if it was I don’t have the means to drag them up on it. Too bad I had to sell our other trailer cause it could haul a back hoe. Perhaps the person I sold it to would let me borrow it. I don’t know. If anyone reading this has an interest in any of these vehicles please let me know. They were all running when parked. The Falcon belonged to the widows mother. She had bought it new so it’s a one owner classic. 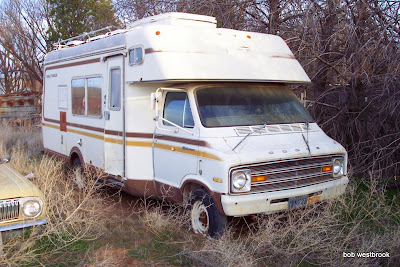 The RV they had bought with dreams of traveling, but they only used it once. He worked through his retirement, got sick, and eventually died. Unfortunately there is a leak in the roof and as a result a lot of water damage inside. The cabinets are made with particle board and that doesn’t do well with moisture. It’s sad to see this damage but such is often the way of things. Life gets in the way of plans made and dreams hoped for. 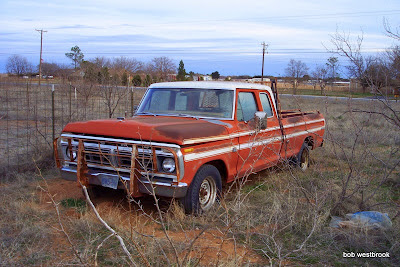 One of the seniors we help told me that she wanted to die a pauper. At first such a statement is a shocker but when she explained this more it made sense. We have all seen the problems that rise up upon someone’s death. All too often there is a seemingly sudden rise of greed and avarice, all kinds of fights, bitterness, and anger appear, causing division and broken relationships that sometimes are never resolved. To disperse the inheritance prior to death often will prevent such things from happening. On the other hand we have seen those who hang on to their possessions till the bitter end, fighting to keep what they have acquired over a lifetime, seemingly unaware that they can’t take it with them when they die. I greatly understand the fondness for those items that have strong emotional memories tied to them, mementos of good times gone and have a few keepsakes of my own. But if something has outlived it’s usefulness, no longer contributes to daily needs, and doesn’t have strong value as a memento, I would rather find someone in need to bless with it. I came into this world naked and when I leave the only thing that matters is what pleases God, the lives I touched while here on earth. Not only is it better to give than to receive but in giving there is great blessing for we share life and the goodness we have, thus expanding the good. 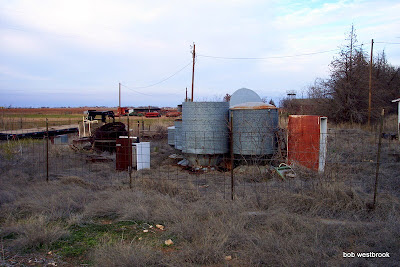 Had an interesting experience last week. Went to the post office to get mail and pulled up to the glass doors and wall in front. Before I got out I saw the pastor of the church that had escorted me out, saying “Don’t come back”, inside. She looked out at my truck and scurried into the post office’s counter area. Curious to see what she would do I sat there in my truck waiting, and watching her. She waited too and then finally came out of the office area, walked quickly past the doors to the other side, where she was out of sight. I debated walking in to get the mail but decided to allow her to avoid having to face me so stayed seated in my truck. It was quite a wait. Finally she figured out I was going nowhere so she rushed out the door, studiously looking at the ground so there would be no eye contact with me. How sad this is. Here is a leader in the church, a person who is bound by God to show love to all, that is running and hiding from the fruit of her actions. “Is she ashamed?” I wonder, “or perhaps embarrassed?”. I really don’t know and have a hard time understanding this level of hypocrisy. But it makes me sad to see and I can only imagine what God feels. 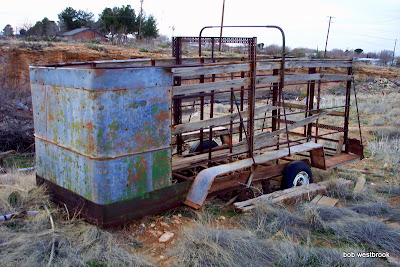 I have decided to go to Mary’s and work on cleaning her property instead of working on the old truck. The trailer I have is on loan and thus I feel a responsibility to make use of it as quick as I can for he may need to use it for his tree business. Plus there is so much to do there it will keep me busy for a while. Enough time writing, got to get moving.
Posted by Bob Westbrook at 9:08 AM