9/11/08 Thursday
Just writing this date evokes memories and the emotions attached. The 9-11 terrorist attacks came during the last phase of my fall, my deterioration where everything I had worked for and achieved broke into pieces and blew away. It was just a few days before what would be my last auction, a selling off of assets I hoped would allow me to rebuild what I had destroyed. The auction was a disaster because instead of a hundred plus bidders there was only about ten. The 9-11 attack thus hit me as well. The auctioneer had advised that I put off the auction but in my desperation to survive I pressed ahead. It was an absolute auction, which means that everything sold regardless of price but even then only ten percent of what I had sold. I couldn’t give it away. 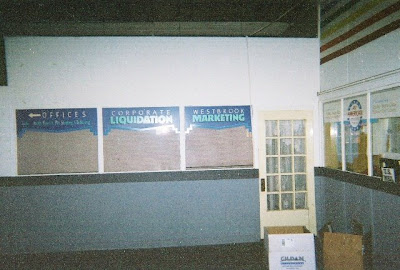 My old offices at the warehouse.

The auctioneer felt so bad after the auction he wrote off the $2000 spent on advertising that was to come out of the proceeds. I ended up using the meager amount of money left to pay for multiple roll-off dumpsters and the labor to throw everything left out. It was the final death knell of my fall. Despite that my heart was with the victims of 9-11 and in my delusion I was thinking of ways to raise money to help them, devising non profit organizations in my mind to disburse the funds raised. Two months later I packed everything I could into a car with no brakes and headed to Texas. That was when I fell asleep at the wheel and had the accident that put me in a coma. I still feel that was the best thing that happened to me, that by dying (I was declared dead at the scene) my life was saved. 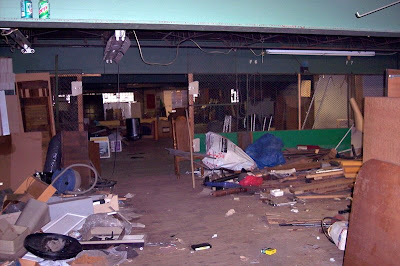 How I found things when I finally got back after the coma. Pretty much a picture of what my life had become.

Yesterday I tried to do as much as I could but mowing the weeds in the rain was an exercise in futility as the clippings just clumped up and clogged the grass catcher. So I pulled weeds in the garden instead. There is no end to the weeds with this rain so I’m behind the gun on this one. But that’s the way it is in the desert. Seeds lay dormant waiting for that rare rain, and when it comes they race to grow and make seeds like a sprinter in the Olympic games. I kept at it till two when one of those headaches reared it’s ugly head and forced me to quite. I came in, took off my soaked clothes, and went to bed, or at least tried to. 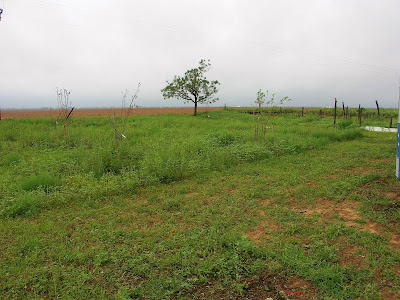 I suppose you could call us the Westbrook kennels instead of Westbrook farms because we now have five cats and five dogs. First we added Ben, the golden retriever rescued from the interstate. The one that was with him and had been hit by a car died overnight. She was such a beautiful dog. I petted her as we drove to the vets and despite broken bones and internal damage she never whimpered once though she would move her head to get more pets. So Ben is now a part of the family. If we find the owners we of course will return her but I doubt that will happen. 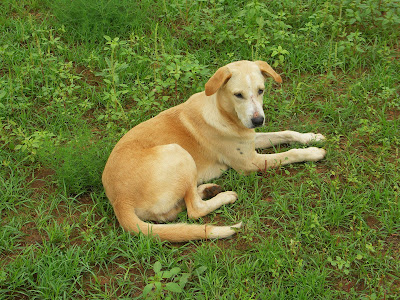 Ben is clingy, afraid to be alone and stays by my side constantly. He doesn’t seem to have much energy and that worries me. Whenever I go out he’ll be right there but doesn’t run with the others much. Ben will beg for pets and whimpers as I do as if he hurts somewhere, but still snuggles up for them, not wanting me to quit. Wherever I am he is close and likes physical contact. If I’m standing he will lay down and rest his head on my foot. We let him inside the house for fear of him wandering off or getting run over.

He isn’t as housebroken as I hoped but is smart so I’ll be able to train him. Fact is Ben needs lots of training with the first thing being able to understand the command “NO”. Ben shows no sign of abuse, at least from humans. He doesn’t flinch at all when my hand is raised. I’ve noticed that poor Gretchen will get up from where she’s laying down and race away when she hears me yell at the dogs while inside the house. They were barking and I yelled “Be quiet, NO” and looking out the window saw Gretchen fleeing. Yesterday, with the headache I did that a lot. This morning Gretchen has returned to her former level of fear, craving pets and creeping close as I pet the others, but rushing away when I carefully hold out my hand. Ben displays nothing like that though he has numerous scars on his body. They all look like puncture marks so I suspect they are from run ins with coyotes. Despite that he has an extremely gentle spirit, even with the other animals, cats included. 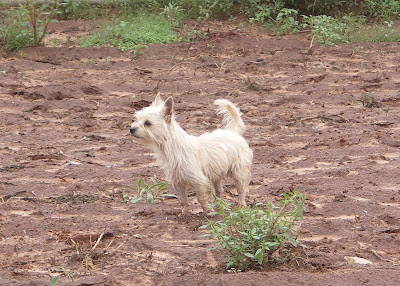 So that’s one of the additions. Here’s the other. Scooter has been taking shelter in our garage at night lately, though he runs out at the first sign of Cherie or I in the morning and stays away. He has made friends with Gretchen and they spend a lot of time together. Gretchen is protective of him when Rascal and Trixie come to them, but they all are getting along.

With the rain yesterday Ben went into the garage and laid down. I went to pet him and noticed Scooter hiding a few feet away. As I petted Ben Scooter watched and I could see the longing in his face so I held out my other hand and gently spoke to him. He tentatively scooted close on his belly till he could sniff my finger. Then I carefully scratched his head and that was like unlocking a door. Scooter jumped into my arms, wagging his tail ferociously and licking my hand, all the while emitting whelps of joy. Wow! He had a flea collar on so there is no question he belonged to someone but he’s been wandering our stretch of highway for a month now. I took him in and gave him a bath in the kitchen sink. He was a mess with matted fur filled with mud and stickers that I tried to comb out as best I could. With the ice broken Scooter instantly lost his fear and gladly became a part of the pack and runs to me or Cherie instead of running away. How lonely he must have been. Poor Gretchen no longer has him for company at night so is lonely too. We really need to build a kennel now. I’ll add that to my long list of things to do. 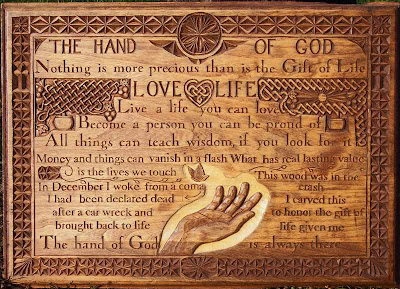 It’s not raining right now but is supposed to later today so I must get out and mow as much as I can while it’s relatively dry. The humidity is something like 93% so there is a dew on everything but it’s mowable. When I get it all mowed I want to till the soil in preparation of planting a cover crop. At least we can afford to buy seeds this time. Things are slowly and steadily improving for us and it’s exciting to see our life growing and things coming together. How blessed I am, how gracious is the God behind all this. The first paragraph of this entry gives you just a glimpse of where I was a few years ago. I am amazed and humbled for of all people I deserve it the least. What a wonder to have such a restoration of life. The biggest wonder of all is the restoration of my marriage to Cherie after twenty years of separation. It all just blows me away, just boggles my mind. 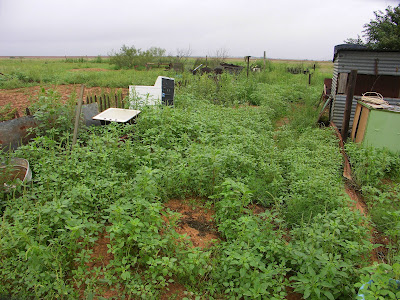 Got to go now. There’s work to be done and I must take advantage of these periods of cognizance and low pain levels, especially no headache. It’s frustrating to have so much to do and lose half a day, or sometimes a whole day, because of pain or seizures so I got to get while the getting is good.
Posted by Bob Westbrook at 8:11 AM

You might want to try giving Ben a raw egg, my Husband and I rescued a dog 3 years ago, on Labor Day. He was so week, his skin was wrecked with flea bites and ticks. My Dad had suggested that my Husband and I give him a raw egg. It is of course a good source of protein, plus it has other vitamins that are good for dogs. We were definitely impressed with how this helped "Beau's" energy level. I will warn you if Ben is a house dog, that it can get a little smelly, our dog never had an accident, but boy o' boy it wasn't a pleasant smell.
I also wanted to tell you that I ran across your blog about a month or two ago, I graduated from Lee in 97 and I will get on here to check the news going on in good ole' Midland, TX. Anyway, I wanted to tell you how blessed I am to read your entries on a daily basis, they warm my heart. I am so proud of you knowing where you have came from to where you are today, GOD IS GOOD!!! I pray that you will take care of yourself, and your lifetime love, don't work to hard, even God needed a day of rest. I look forward to reading more entries and may God bless you, your home, your family and your friends.

Thanks for the advice. I clicked on your name and it took me to your new blog that you just started today. Go for it and keep it up. It's a powerful way for your friends and family to share in your life. The rotten smell from Ben has already made itself known. I figure he'll get used to the new food and that will get better.