It's good to be home 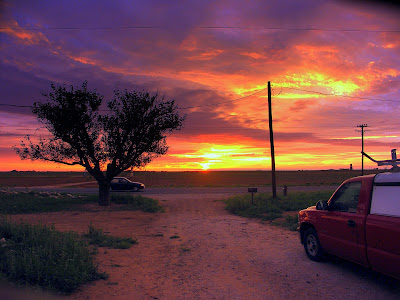 This morning's sunrise. You can see Cherie heading out to her job.

9/8/08 Monday
I’m back. I know I arrived Friday but I think Saturday was mostly spent catching up on some badly needed rest. Sunday we went to church, where I was able to thank everyone for their precious gifts and the love they poured out for people who are strangers to them, people they never met and didn’t know. What an example of Christ’s love they showed.

Here is the letter I wrote and posted on the bulletin board. I’m sure many didn’t have a chance to read it so I will send it out on our class’s email network. I’ll post it here as well. At the end I put an accounting of the disbursement of these funds because I believe that’s the way it should be done in any ministry, and this was ministry. It’s just a matter of being responsible and careful with the moneys others donated. I suppose that because of my somewhat “colorful” past it’s a way of insuring there will be no misgivings regarding how I handled these funds. There is a fear I have, because of my past, that I will be distrusted. This is part of the paranoia that came with the brain injury. For me, the most valuable thing a man has is his reputation. Honesty, integrity, and a sense of honor are the hallmarks of my definition of being a real “Man”. 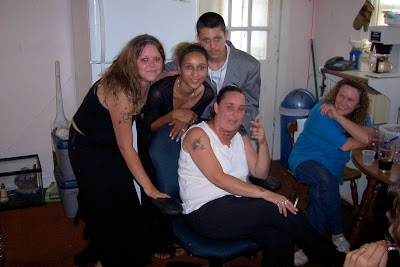 Suzie (Eileen's daughter)with her son and one of her two daughters. The girl in the middle is the son's girlfriend

Thank You
I can’t put into words the impact your gifts and love has made in the lives of Eileen’s family. Theirs was a tough time that was compounded by the poverty that traps them. It is hard when you can’t afford to bury your mother. But with just a few words from me your hearts reached out to touch a family fifteen hundred miles away, and what a touch that was. Not only was a significant portion of the funeral expenses paid but other needs were met as well. By the way, when I sat with the funeral home director with the immediate family and went through the expenses I told him about your donations. He was touched and wrote off the remaining five hundred dollars that was due. So one blessing spawned another. The funeral has been totally paid for.

I hope this doesn’t sound egotistical but another blessing that came from you was giving me the ability to go there. I was able to give the eulogy for my best friend. At the end of that I told of how Cherie and I both knew that Eileen was a Christian and knew the Lord. I talked about how she no longer suffered the pain she constantly lived with and finally has peace, having escaped this world, mostly the east side of Toledo with it’s rampant crime and misery. Then I said I looked forward to giving her a hug when I got there and spending eternity with a good friend. “If any of you would like to see her, all you have to do is make your peace with God. It’s easy to do and if you don’t know how come see me after this and I’ll be happy to show you, or you can find a pastor who can do so”.

I helped Suzie, who’s the executor of the estate, understand what that entails. Having just gone through it with my grandmother’s estate I have an understanding of that. There is hardly anything left except the house and that’s in bad shape. I encouraged her to find an attorney and offered to help with that expense as well. It looks like there may be one who will handle probate for no charge, paid for by a friend of the daughter.

I took them all out to eat at Red Lobster, partly because that is the place we had taken Eileen before we left to come to Texas. They have never been exposed to this level of dining at all so it was a shock, culturally speaking. Actually they may have never been to a restaurant at all so I carefully guided them through it.

I hope I was able to guide the aggression many of them feel about the heroin addict who is responsible for Eileen’s death to healthier avenues but only time will tell. At least I was able to calm tensions for a little bit. But I was able to hug and comfort and that was a big help.

So thank you on behalf of the Carder family and from me as well. Yours’ was a powerful witness to the love of Christ. (But you guys have been doing that since we met you)

So this is the first full day I have since coming home. Sunday after church I had a seizure, one of those slowdowns that drain me and reduce my ability to get things done. I don’t get them often but am grateful I didn’t have one while in Toledo. These are often triggered by stressful situations so it’s amazing I stayed sharp the whole time. I have to think the prayers of our church family helped in this. 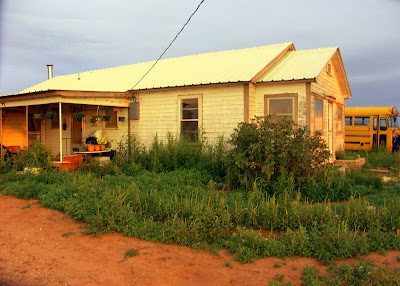 I have a tremendous amount of work to do around here. Unfortunately a storm just rolled in so that will slow things down. The good side is the rain will soften the soil making digging post holes much easier. If I have time I’ll get the tiller out too. But first is to attack the weeds. I won’t be able to finish that in a day, it looks like a full week’s worth of work. I need to call the old guy to let him know I’m back but I need to take care of things around here before I go do some work for him.

It’s raining now so I’ll be able to do some writing. See ya next time.
Posted by Bob Westbrook at 7:46 AM

Sorry to hear about your friend Bob. I have been out of touch due to an infested computer, and am just now checking on you. Glad that you were able to attend her funeral, and I will be praying for her family.

Thanks alot Amy. They can use all the prayer they can get, not because of the funeral but because of the influences that surround them in that city. There is a darkness there that wants to steal, kill, and destroy.