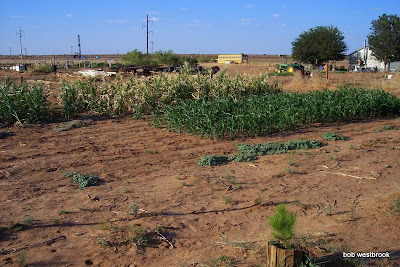 The new corn is doing well. I will be planting a new batch soon, the last batch

8/7/11 Sunday
I’m back from the prison now. Always appreciate the opportunities my Lord makes available to me, and have a deeper realization of how much good can come out of the not so good life I lived. There is power in the testimony of God’s hand on our life, of the miracles He has performed in restoring my life, wife, and faith.

What I participated in was a marriage seminar. “A marriage seminar in prison!!!???” I’m sure you might wonder. Absolutely. Fact is that marriages suffer greatly anytime someone is incarcerated, many end before that person is released and something like 80% end in divorce within a year of a persons release. The figures are even worse for female inmates. In all of this there is much pain and heartache, not just for the married couple but the whole family, especially if there are children.

It was a wonderful time, where we were able to bring the wives into the prison unit for this two day seminar. During regular visits there is normally no physical contact allowed but with the seminar they are able to sit next to each other and even hold hands. A normal visit only lasts a predetermined length of time but with the seminar they were able to spend a total of fifteen or so hours together, under supervision of course. I was there as an observer this first time, to see if this is something I would like to become regularly involved with. It is. I look forward to serving in this ministry.

Turned the TV on and went to the Christian station we can usually get. Once again I heard someone selling God. It would be one thing if the 49 dollar teaching DVD presented the truth but this one was far from the truth. I’m seeing more and more false teachings being presented as the truth, and always for money. This is accepted blindly more and more and those who speak the truth are rejected and even attacked. On the TV at the hotel, where I could get stations not available to us on the farm, I saw stories of men who conned millions out of churches that had the least, and other tales of those who use the name of the Lord for their personal gain. There is great deceit and many who, not aware they were deceived, are passing on the false message they so gladly received, confident they are speaking the truth and leading others to righteousness. These messages appeal to the flesh, speak of gaining wealth and spiritual powers, stroking the ego’s and feeding pride.

Opening the local paper I read the column produced by the pastor that led her church to reject me, and was not surprised at what I saw, just saddened. This pastor, who refused for a year to sit down and talk with me, rushes to talk about me. How can she be so blind? How is it she is unable to recognize the wrong in her actions, unable to discern what a great sin she is committing? Is it because of her age? I know she gets lost and confused as she teaches, so perhaps it is that. I don’t know, I pray for her, love her in the Lord, and fear for her because I know God, that His patience only lasts just so long, and then it’s hammer time. But God’s discipline is only to get us to repent, to change the direction we are heading in, too save us in the end. 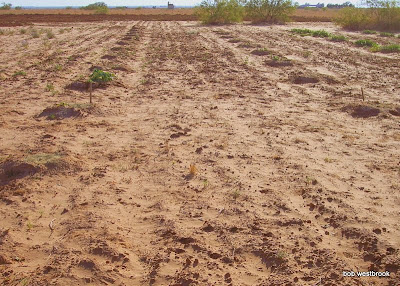 You see the patch of green on the third hill on the left? when I left all twenty plus hills visible were covered with melon vines like that. More about that a little farther down

What I read in the paper revealed confusion. She talked of those who think they are saved but are not and said they cause destruction everywhere they go. Salvation is a judgment that only God can make, and anyone who dares to stand in that place of judgment, who puts themselves in the position of God, is deceived and deceiving themselves. She talked of those who know the bible, who can quote it, a not so veiled reference to me, something I’ve heard many times while at that church, and intimates that the person “hates” those who know the Lord. Fact, she has never sat down to talk with me. Fact, she made judgments regarding who I am and how I think, calling it discernment, yet never talked with me. Fact, she gossiped and talked about me to others, under the guise of “spiritual” concern. Fact, she never followed the clear instructions from Jesus, Himself, despite the fact I emailed and wrote them with the hope she would do what Jesus said. Instead, in the hardness of her heart, and stubbornness, she said I was using the scripture to manipulate her, stiffening her neck even farther. Is she unaware that God sent me to this church, that I didn’t come because I wanted to? Or is that just an inconvenient possibility. But now she is talking about destruction. Makes me wonder what has happened for I have no idea. However I do know my Lord, the One she denies I know. Here’s the scripture He gave me a few minutes ago.

Isaiah 44:24 "This is what the LORD says-- your Redeemer, who formed you in the womb: I am the LORD, who has made all things, who alone stretched out the heavens, who spread out the earth by myself, 25 who foils the signs of false prophets and makes fools of diviners, who overthrows the learning of the wise and turns it into nonsense, 26 who carries out the words of his servants and fulfills the predictions of his messengers

Time will tell. I love you pastor Jannie, though you refuse to understand that. I still pray for you and the rest, and will continue to do so. Anytime you wish to talk, I’m here. I serve in many places, both far and near, give much of my time helping others and do it to show the Love of Christ because His Love resides in my heart, and I see through the Lord's eyes. 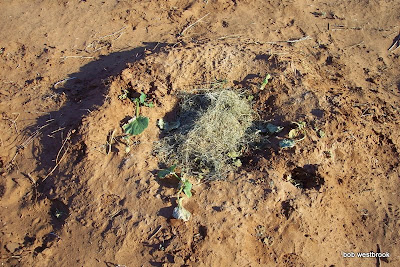 There were seven Israeli cantaloupe on this hill, they covered the whole thing so you could barely see the ground. Multiply that by 40 hills and you've got an idea of the damage

I missed my farm and was anxious to go out and see what happened over those three days I was gone. It wasn’t all good. Seems the rabbits have almost totally wiped out the Israeli cantaloupe. They don’t mess with the water melon for some reason, bypass them to get to the cantaloupe. I have replanted much of it and will replant more tomorrow. Now that I have permission for a controlled burn I can get rid of one of their hiding places, but there are many more. It’s just hard but that’s a part of farming. If I had the money I could put up fences and other devices to keep rabbits away, along with gophers too. All in time, it will happen as God provides. 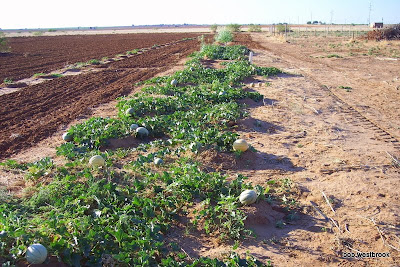 The other cantaloupe is doing well, at least the Tuscan variety that rabbits never messed with too much. Some of it has become ripe so I ate the first one just before I left for the prison. Ate another when I got home. Some of it split open. I think that is from too much water or something, though I haven’t watered them much lately because I heard that drought makes melons sweeter. Dogs haven’t messed with them much so that is good. There was one that had a bite mark, and was pulled off the vine, but it was never opened, just played with.

If you want to know what the Lord says about drought, read Jeremiah 14, all of it. It also speaks of the false prophets who say “Peace” when there is no peace.
Posted by Bob Westbrook at 6:31 PM