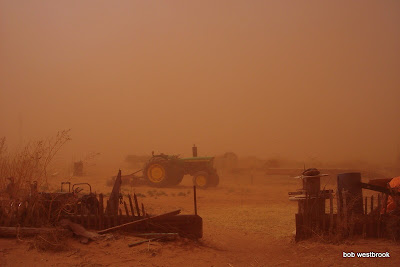 8/3/11 Wednesday
11:20 – It is already hot out there and we haven’t reached noon yet. I’ve been mowing the areas of grass that we managed to grow. On these small areas if grass I keep placing the water hoses that leak despite being turned off, so that none of the water is wasted and it encourages the grass to keep spreading out. Eventually they will spread to the point we actually have a lawn. A little unforeseen issue is that anywhere there is something that catches the blowing sand the sand builds up. I have some areas of grass that are almost 24 inches taller than the surrounding surface now, despite it all originally being the same level. Most of the areas are only 6 to 10 inches higher and close to the house it’s not a noticeable problem as the house disrupts the wind. 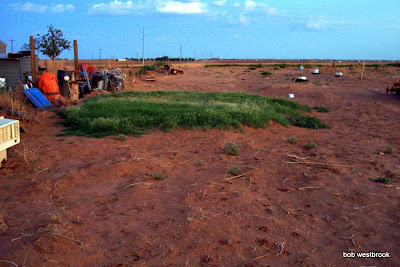 All of the grass clippings I am saving. Worked hard to get the mower that has a grass catcher running and after much playing have managed to override the governor that kept the RPM so low it would stall out in anything deep. The grass clippings are full of nitrogen, as in fertilizer, while green, so makes wonderful compost. It doesn’t stay green long in this dry heat so I pile it up in the composting bin where it won’t dry out quick. A lot of it I am placing in the center of the melon hills I worked hard to create. There it will provide some protection from the sun baking all the moisture out of the soil and some of the nitrogen will make it’s way into the soil. 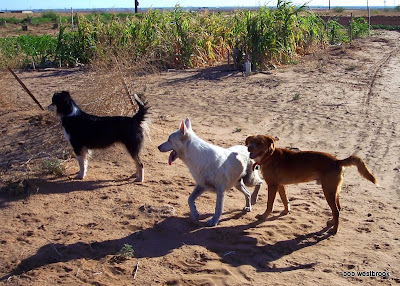 I must replant many of the Israeli cantaloupe as the rabbits have discovered that patch. Went out last night to turn the irrigation on and my flashlight revealed a rabbit busily destroying them. I had thought that rabbits didn’t come out at night, that the best time to catch them was dawn and dusk, so that’s when I went out with the shotgun. Never found them at that hour and guess I know why now. Fact is I don’t know much about rabbits at all, other than they are destructive as all get out and prefer young tender plants over stuff that’s been growing a while.

This mornings bible reading included 2 Corinthians 2:5 through verse 11. I read the scriptures with the things we’ve seen and experienced always in mind and so it was with this one.

6 The punishment inflicted on him by the majority is sufficient for him. 7 Now instead, you ought to forgive and comfort him, so that he will not be overwhelmed by excessive sorrow. 8 I urge you, therefore, to reaffirm your love for him. 9 The reason I wrote you was to see if you would stand the test and be obedient in everything. 10 If you forgive anyone, I also forgive him. And what I have forgiven--if there was anything to forgive--I have forgiven in the sight of Christ for your sake, 11 in order that Satan might not outwit us. For we are not unaware of his schemes.

There is a good chance that the person spoken about here is the one mentioned in 1 Corinthians 5, where a member of the church was sleeping with his fathers wife. In that situation the church evidently weren’t doing anything about it, and in fact Paul indicates that they were both arrogant and boastful. Paul gave clear instructions regarding how to deal with this sin and that included casting the man out of the assembly and advised them not to associate with immoral people. “A little leaven leavens the whole loaf” Paul stated, talking about how one persons corruption spreads to infect all around them.

Then Paul makes a statement that has thrown many into a quandary. He said “I have decided to deliver such a one to Satan for the destruction of his flesh, so that his spirit may be saved in the day of the Lord Jesus”. WOW! Do you see though, the final intent of Paul’s heart in this? First his concern is for the whole assembly there, that they not be infected with the sin that so easily creeps into our lives. But finally, that the person referred to be saved in the end, that he make it to heaven and not get condemned to hell.

So here we are a period of time later, and Paul evidently brings this subject up. It appears that the assembly did indeed cast this man out, but now Paul instructs them to forgive this person and “Reaffirm your love for him”. If it’s the same person or not I don’t know, but the principle revealed is one we should give attention to. Jesus said we should “Love your neighbor as yourself” and so it should be with one who had been caught up in sin and ostracized. Our goal, in everything we do, should always be for the betterment of other people, but NEVER for spite, jealousy, or any other personal reason.

Of course I contemplate this in relation to being “Cast out” of the little church in Stanton. What did I do wrong? I really don’t have a clue, because not one person took any time to explain it to me. What I know is what has been said, though no one directly spoke to me. There was all of this round about kind of speaking but no one had the integrity to speak to me. Domingo sat there next to me on that day, as we had class, talking about “Someone” who was in the church trying to change things, but they were doing it “In the flesh” but not “In the Spirit”. I figured he was talking about me so turned and said “Could you say that again” and watched his eyes as he repeated himself, confident that he was speaking the truth and looking directly at me with that righteousness he was given through whomever had filled his heart with such lies.

Paul ended his discourse on this with “I have forgiven in the sight of Christ for your sake, 11 in order that Satan might not outwit us. For we are not unaware of his schemes.” It saddens my heart to know that in this little church Satan has indeed outwitted them, that he was successful in his scheme. My prayer is that they be able to see and understand the great evil they have committed, in the name of the Lord, in the guise of holiness and religion. Still there is no contact and though I reached out to Clarence he has not responded in any way. At the heart of all of this is pride, and there is evidence that the pastor was envious and jealous of the fact that I graduated from bible college and also that I have such a powerful testimony. God, have mercy on them, but bring them around to know the truth that no one else be treated in such a way.

I’ve had my break, drunk more fluids to rehydrate. Now I think I should grab something to eat, then run into town to check mail and deposit a check that came yesterday. The new dog, Duke, is doing well. He’s a beautiful animal. Now we have a white dove and a white dog. It would be real cool if I could get them to pose for a picture together but I know the odds are that will never happen.
Posted by Bob Westbrook at 10:48 AM