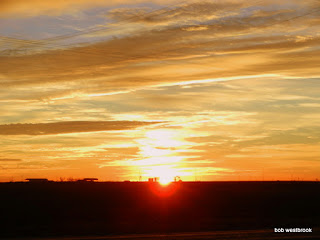 There is an increasing sense of requirement I have. How do I explain that? How do I put it into words? It is not a simple thing so demands explanation. There are many factors involved in this sense of requirement, many areas of our life and responsibilities that come into play. Part of that is a premonition of impending events, an urgency to get things done in time. There are many things we are doing that require attention. We are buying the property on the interstate and then must prepare it to park a dozen or so RV’s in addition to opening the store. That requires shelves, counters, cooler, washing machine and dryer, along with a long list of things. It is quickly approaching planting time on the farm so much is required there as well. Ground needs to be cleared and plowed. Irrigation systems installed and repaired. Fertilizers and worm castings need to be mixed and some material purchased. Seeds are mostly bought or saved from previous plants but we still need a few more. I have renewed my efforts on writing the book, having had to start over because so much material seems to have vanished into thin air. There is an increased urgency in my spirit to write or finish writing the bible studies and doctrinal papers, along with two books that are in addition to the biography I mentioned before.

At the heart of all this is the realization that God requires much of me. Someone just said the other day “You know God didn’t raise you from the dead for nothing. He has big plans for you”. In my prayers I constantly ask “Why me Lord. Who am I to represent you?”. I understand deeply how far short I fall, how flawed I am in the eyes of God, how unworthy I am to stand before anyone and represent the creator of the universe. But I find myself being put in the most awkward position of having to warn others about the direction they are heading. Jesus one time said something about taking specks out of other people’s eyes when there is a log in your own eye and I am big time aware of the logs my eyes have. There are those who love to point out the faults of others, and are almost gleeful about it, but the problem is in the heart, the motivation behind it. I want people to be better, to help them improve, and have no interest in publicly belittling them, preferring instead to talk with them privately and personally. This sense of requirement comes into play here, coupled with an urgency. The urgency is related to knowing what the future holds, the understanding that we are living in the last chapters of the bible, the last days are upon us soon. During the times of hardship to come the body of Christ needs to be united together, not divided and torn apart by jealousy, strife, personal ambitions, and the pride that is the source of all these things. 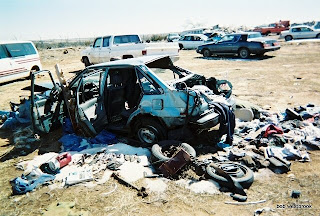 Who am I to be involved in such thing? I am God’s child, raised up by Him for tasks only He knows. I was raised from the dead in two ways. I was physically dead for sure, officially declared dead by the coroner and listed as a fatality by the state of Oklahoma. But I was spiritually dead too, even before the car accident. I had long before turned my back on God, walked away from the faith and ministry I was in, falling to the point where I denied or doubted that God even existed. So I was twice dead. But now I am twice alive. My body, beat up and damaged as it may be, is alive. In a way it was like I was born all over again for they had to teach me how to talk, how to walk, had to wear diapers like a baby till I was able to use a toilet. Heck they even had to show me how to flush it. I was taught how to brush my teeth and take care of all the basics of life. In the same way I was reborn spiritually. That was harder and took a while because the required first step is to believe that God is. My first prayer was “God, are you there? If you are I really would like to know, help me believe.” It took years and many miraculous events before I was convinced that there really is a God and He really does get involved in men’s lives.

Thus we get to this point in time, now. Now I know there is a God and now I understand so much that was lost on me before. Now I speak with the living God on a daily basis and hear from Him as well. No, I don’t hear any voices. There are many I have heard say “God told me” but I don’t have that privilege of hearing God’s voice in a clear audible way. What I do have is an understanding of things that is beyond what I had before. I read the Bible and things are suddenly clear that weren’t before. There are still plenty of things in the Bible that I don’t quite get but what becomes clear is often just what I needed to know when I needed to know it. 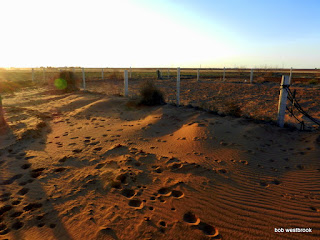 What I know now is that things are going to change. What was once secure, what people thought would always be there, that they could rely on, will be shaken. Complacency will have a cost. Deception has always been around but it will be released. A lie will be seen as the truth and truths we know will be portrayed as lies. Division has always been a curse we have had to deal with but it too will be unleashed in ways beyond what we have seen before. It will come through gossip, back biting, and despising or looking down on others, thinking you are better than they are. This will increase and the love and forgiveness Jesus teaches will be practiced less.

Meantime things are progressing on many fronts. I was contacted by a man who was looking to buy land for an RV park and when I told him we were working on putting one on our land he asked if I would be interested in a joint venture. Of course I will look at that, but must be careful because I am not what a friend called “Sophisticated” when it comes to investment stuff. The title search on the old store is being done now and when completed we plan on finalizing the purchase of it. This is a nervous time for both Cherie and I. We have had so many things go wrong and not work out it is hard not to be gun shy. I know I am to trust in the Lord with all my heart and lean not to my own understanding and I do trust in the Lord, it’s people I have a difficult time with. We know there is an enemy who is very capable of swaying good people to do bad things and have seen that many times.

Work continues on the farm but there is always something that gets in the way. I bought tractor diesel and put the hydraulic fluid in to replace what leaks out all over the place. Charged up the battery so it would start, all this 3 days ago and have yet to get the tractor started. Will be doing that as soon as I get done writing and posting this. 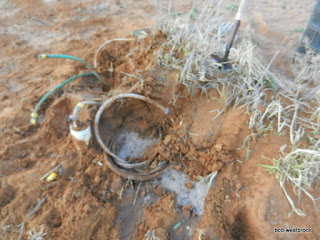 Had to dig a water hose out from under the sand dune that covered it with two feet of dirt. That took about 45 minutes of digging by hand. Paid for it like I pay for all physical labor, just a little pain, nothing unusual but always slows me down. Ran the sprinkler to get some water to the rye and hairy vetch seed I planted last week. It never rained and the birds ate some of the seed. They say there is a chance of rain tomorrow and the day after. That would be cool.

One of the jobs I must do with the tractor is to remove some of the sand dunes that blew in with the recent wind storms. There is an area we put fencing up a few years ago and I want to plant the climbing type plants along it so they can use the trellis to climb on. But to do that I must remove the extra sand and then place drip irrigation tape along the fence. Years ago I buried drip tape along the fence line but that has been lost for some time now. Some was damaged by gophers and who knows where it is now. The land here moves around so much. Some areas rise and others are blown away. 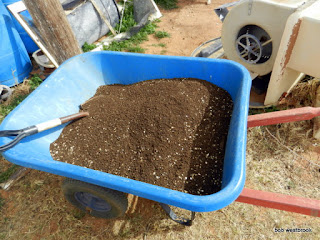 This is a wheelbarrow of worm castings. The white specks are bits of eggshell from the table scraps we feed to the worms to make compost. There are many more I need to sift out and recover.

There is so much work to do and so little of me. I dream of getting the RV park going so I can afford to hire some help. In the balance of things there are other things I do and in the unbalance so many of them get neglected. The books I need to write but don’t get to work on them as much as I want. Of all the things I do the most important in my mind is what I do to bring knowledge of God to others. I visited the jail again yesterday and there were two new guys I haven’t seen before. One was young, looked fifteen though I know he is considered an adult because he was facing charges. I talked to them about the love of God and how through God we have a future. Not only a better life here on earth through living right but an eternity in heaven.

What I understand is that it does not matter if I become a wildly successful businessman worth millions of dollars because when I stand before God on judgment day that has no value to Him. What matters in the long run is the lives I can touch and help, the sacrifices I make for others. For me getting the RV park or anything else going is mainly about freeing up my time to serve God, providing some security for my wife, and helping others by providing jobs or places to stay. 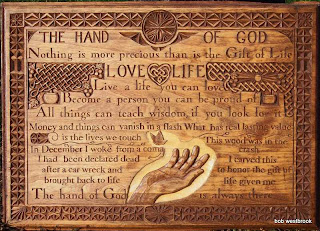 There is work to do. I don’t have a list and as always am not sure of what I need to be doing. I wonder if there is something I should be doing regarding the RV park but can’t think of anything. I washed some dishes for Cherie. It is hard when you can’t remember things. So much gets neglected and forgotten. So I will press on and get on the tractor to at least start that process.
Posted by Bob Westbrook at 9:31 AM

I responded to your post on my blog with two bits of advice regarding the JV and one other thing. I hope you get time to hop over there for a look, what with the tractor and all.