No water this morning 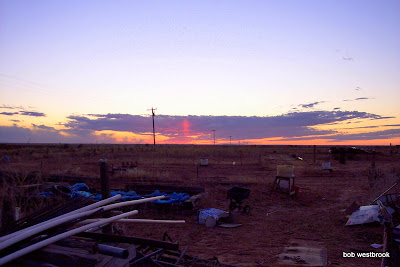 12/4/11 Sunday
Sunday morning. It’s chilly and we don’t have any water. I will fill up a bucket from the plastic children’s pool outside, that we always leave full for the dogs to drink out of, so we can use it to flush the toilet. As soon as I am done writing this I will return to working on the booster pump. I think I will take Cherie’s hair dryer out with me because the glues may be temperature sensitive. Perhaps that’s why it blew apart last night, for it was definitely getting cold. Plus, in my haste to be done, I didn’t wait as long as I should have to let the glue set. And there is the possibility that I forgot to put glue on the joint that came apart.

We listened to Charles Stanley this morning. For now our church is on television. We don’t have the money to drive into town more than necessary so visiting the churches in Midland will be put off till things get better. It’s sad we have found such a judgmental spirit at the church in Stanton. From what I hear this is not an uncommon problem in many churches here in America. How our Lord’s heart must break as His commandment to love your neighbor as yourself is ignored every time it becomes inconvenient. But it’s not a new problem, has been around as long as man. It was the religious leaders, the preachers, teachers, and pastors, if you will, who, in their arrogance and self-righteous assurance they were pleasing God, persecuted and conspired to kill Jesus. After Jesus was crucified the persecution was next focused on all those who believed in and followed Jesus. One of the greatest persecutors, Saul, was confident he was doing the work of God as he traveled finding Christians, putting them in jail, and watching in approval as others stoned them to death. But he had an encounter with Jesus on the road to Damascus, and understanding his error repented and became one of the greatest proponents of Jesus that ever lived, changing his name to Paul.

So you, who think poorly of your fellow brother or sister in Christ, gather hope from this. For God is always there to forgive you of this grave sin and help you change your mind as soon as you understand how evil it is to despise those whom God loves. 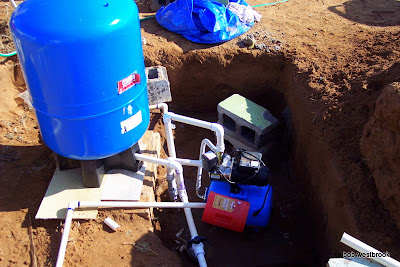 Here is the finished booster pump arrangements. The pipes seem to be holding now but there are several small pinhole leaks. I suspect they are due to the glue not working well in the cold weather. The red plastic coffee container I used to provide some protection for the power plug. We can't afford to buy a regular waterproof electrical socket so do the best we can with what we have. When weather gets warm and budget allows I will probably redo the entire thing, re-gluing all those joints. Everything you see is subject to freezing, and that will be a major problem. I plan on building a shed around it with the cinder blocks I recovered from an old hotel that was torn down. Now I wish I had gotten more of those bricks for they all got hauled away. So I will learn a new skill, having never done any brickwork before. But till then I guess I'll have to cover this all with blankets and hope it doesn't freeze and break the pipes. If we had the money I would buy the pipe heating stuff I saw at Lowes that allows you to wrap the pipes and plug it in to keep them from freezing. Maybe a small space heater and some plywood over the top would work for now.

Looked at the whole booster pump array in the daylight. Could only find one area where the joint gave way. It does not appear that I forgot to put glue on the joint but if I did it wasn’t a whole lot. I got Cherie’s hair dryer and heated everything up the best I could in 36 degrees and glued it back together. This time I heated it after gluing for fifteen or so minutes to do my best to insure it held. Read the instructions again just to make sure and it says to leave the joint set for two hours to allow the glue to set, and longer if it’s under 60 degrees outside. I didn’t let it set last night in my haste and tiredness so that’s probably the problem. Will see at 11:30 when I run down to the well and turn it on.

The internet says our high today will only be in the 40’s so I started a fire. Tomorrow the real cold hits with a low down in the 20’s. We dug the electric blanket out for the dogs but Duke and Buddy don’t sleep near each other. Duke sleeps in the garage and Buddy stays out on the veranda. I think I will clean out the insulated dog house I made for Gretchen and Ben a year or two ago, when Gretchen had her puppies. How I miss those dogs. The hurt is still there, along with wondering who shot them and why. Was it random or something personal from someone who is busy with the hate that consumes so many. I don’t know but still pray for them, and continually forgive every time it rises up in my mind again.

Christmas is coming. This is one of my least favorite times of the year as the insanity and fervor for what has become a false holiday increases. It has become the one time of year many businesses depend on for survival as the battle to buy presents rages on. There is nothing wrong with giving gifts but now, if you don’t, you are looked on as a scrooge. So many these days expect to receive and get angry if they don’t. Depression and suicide are at an all time high during this season as many struggle to deal with all the pressures that our society and culture have forced on us. At the root of it is greed. There is corporate greed as businesses strive to strip us of as much money as possible, competing with each other for every dollar we have been so carefully instructed to spend. Then there is the greed we breed into our children as the day after Christmas it becomes a “What did you get” contest.

Lost in this mix is the tale that this is the day that Jesus was born. The fact that the early church, under Constantine and his mixing of pagan beliefs with Christianity, chose this day to replace several existing pagan holidays that revolved around the shortest day of the year is lost on most. The fact is no one knows for sure what day Jesus was born, but historical evidence points more to in the fall than Christmas, based on when the census was that forced Joseph and Mary to travel to Bethlehem and the Jewish feasts. There is strong evidence that Jesus was born during the feast of Passover which would place the time somewhere in the middle of April. Personally I think it not bad to pick a day to celebrate the birth of the son of God, that it is good to recognize and celebrate His birth regardless of what day it was. But the Christmas tree and giving of gifts are directly related to the religion that came out of Babylon when Nimrod’s mother, who was also his wife, instituted that practice. Like it or not this is historical fact.

So I will celebrate the birth of Jesus, every day. And not just His birth but His death and resurrection too. For it is in this that I have a hope of eternal life. I explained this to the young man in Jail. We have all heard (or most of us) the scripture found in John, 3:16 16 “For God so loved the world, that He gave His one and only Son, that whoever believes in him shall not perish but have eternal life”. I spent a lot of time with the young man explaining what it really means to believe. Lots of people believe, or say they believe, in God, but do you really believe that you will stand before God and be judged for what you do? To truly believe means you understand God is God and Lord and thus you submit to His authority, obeying what He says to do. Most people are not willing to surrender what they want, to make a sacrifice of personal pleasure, to obey God. Instead they try to put God in a box that allows them to do what they want without fear but in the end God is God and we will have to answer. Do you really believe? I know I get preachy but I hold an answer to many peoples problems, an answer I have learned is real and works, I know how to live forever and enjoy God's blessings here in this life as well. When you have a life saver in your hands and are watching someone drown to not throw them the life saver and even try to save them is a crime. And God will hold us accountable for that for sure.
Posted by Bob Westbrook at 7:26 AM