Not as good as I used to be 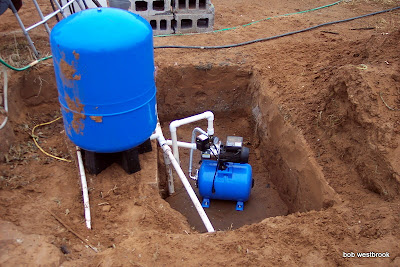 12/3/11 Saturday
I focused on finishing up the well today. It was a greater struggle than I expected. I thought I had all the pieces of PVC cut and trial fitted so that when it came time to turn off the well so I could cut into the pipes things would go smoothly. Such was the hope but that was shattered by a strong dose of reality.

I hate reminders that I am not as smart as I used to be and today those reminders were slapping me in the face. I’ve come a long way since I woke from that coma but still face some difficulties. I looked at a piece of pipe as I prepared to glue it in place and wondered why I had cut it so long. So I cut it shorter and glued it in place. It was maybe twenty minutes later I realized it had been cut correctly. I confused the intake with the outtake parts of the pump and that was just a start. Five hours later I am finding joints I forgot to glue and came up with some creative ways to compensate for mistakes I made earlier.

It’s dark now so I got flashlights out so I can see what I am doing. My pain level is way up there from crawling in and out of the pit I dug in addition to carrying the pump itself to the garage five or six times to modify the mounts in order to make the pipes line up. Finally I think I am done so have Cherie come out and keep an eye on it while I drove the half mile to the well and turn it on. Unfortunately my phone had run out of juice unbeknownst to me earlier in the day so she couldn’t’ call like I had asked.

Coming back to the house I discover there were just a few small leaks from poor glue jobs but I figured I could live with that for now and would fix that later. But then a pipe let loose. Nuts. So I rushed back to the well and turned it off. Coming home I find Cherie screaming at Buddy and Duke, who were viciously fighting. I tore them apart. It’s not the first time they have gotten into it. In fact they had fought just the day before and I got bit when I reached in with my hand to pull them apart. Not good. Looks like we will have to find another home for Buddy. He is absolutely the friendliest dog I have ever known, but he doesn’t get along with other dogs well.

I am beat. Worked on the well all day long. But tonight we have no water at all. While we did have the booster pump running I had Cherie turn on the water in the bathroom. It was a little better but still just a trickle coming out of the shower. This tells me that the new pipes installed are plugged up. Probably with the shredded plastic I have found in the filters of the farm irrigation system along with salt and hard water deposits. It looks like I must replace the pipes in the new bathroom already. What was installed are small diameter flexible hose things that screw into place. The new fixtures were set up to use those or to use conventional copper or PVC pipe and the plumber our friends hired to do the job opted for the easier flexible pipe stuff. I don’t think it would have mattered as that shredded plastic would have lodged where the valves and stuff are. Oh well.
Posted by Bob Westbrook at 7:24 PM