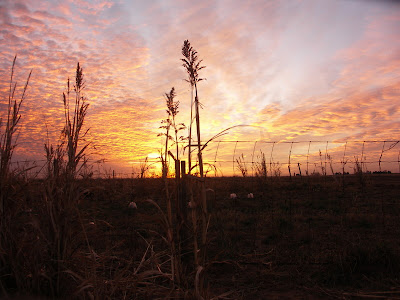 12/23/08 Tuesday
This is the first day it will be warm enough for us to feel it’s safe to lift the lid on the doghouse. We read that in the first few days after birth a cold chill can kill a puppy so have been careful. There is no doubt the inside needs serious cleaning. We haven’t been in there since Gretchen gave birth. This morning I saw what may be blood in the kennel and it appears that Gretchen has the runs. She was waiting anxiously for me to bring food this morning. That’s a good sign. Gretchen cleaned the bowl of canned food mixed with dry quickly but hasn’t touched the evaporated milk mixed with egg yolks I fixed for her. She’s pretty much staying inside the doghouse with her pups. 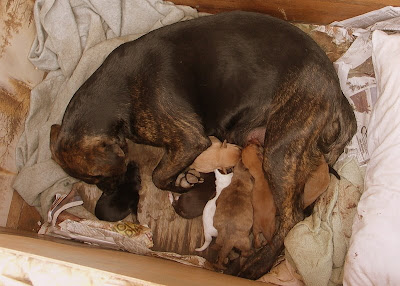 Here it is, the first picture of the puppies. We thought there were six, maybe seven but there are eight.


We are anxious to see what’s in the doghouse, you know, how many puppies there are and what they look like along with checking on their health. I’m not sure what to look for in that regard. Cherie wants so much to be here when I open it up but has to be at work. I told her I’d take pictures. It’s getting dark by the time she gets home now. She loves her job by the way. I don’t remember if I said anything about it but she is working at a church.

Rascal has taken to peeing in the living room. He must have a bladder the size of a basketball. Because of that we lock them in their room at night and whenever we leave. This morning we let them out and were keeping a close eye on them, figuring that as long as they were with us in the bedroom it was safe. When I went to their room to get some food for Gretchen there was a pool of pee running across the floor. Unfortunately this triggered a burst of anger. I hate that, hate it when I’m cussing and screaming at them. At least I don’t beat them, I’m glad I have that much self control. It’s a bitch being fifty two years old with the emotional control of a four year old. Pretty hard on the self esteem.

What am I going to do today? I don’t know and that’s not a good way to start. If I don’t have some kind of a schedule, a list of things to do, not much to nothing gets done. So I must make a list now. That’s all part of what I was taught at the Brain Injury Institute in St. Louis but it doesn’t do any good if I don’t practice it.

Ok, here goes. I have to clean out the doghouse and put fresh blankets in. That will wait till after it warms up pretty good. There is plenty to do in fixing up the garage to be a workshop. I never did sow the rye and winter wheat seed but if I did I haven’t finished hooking up the water system so couldn’t get water to it any way. That’s something I need to work on. A key to that is continuing to dig deep trenches in search of the water line from the well. That’s pretty hard on me physically but has to be done. There are a few warm days predicted so that will help as long as I stay sharp. Christmas is supposed to be seventy degrees.

Christmas will pretty much be just another day for us. I will try to call my dad and wish him a merry Christmas. If he answers and doesn’t hang up it will be the first time I’ve talked to him in years. Hell, I don’t even know if the phone number I have is right. We’ll call Cherie’s family and friends in Toledo but that’s about it. Cherie and I agreed to not get each other gifts. I wonder if I should anyway. But if I do and she didn’t it would make her feel bad. I don’t know but need to get outside and do something instead of laying around worrying about it. Something else I need to do is clean the ashes out of the wood burner. We’ve made a serious dent in the wood so I wonder if I cut enough. It looked like there was plenty before but my ability to judge things like that is poor. We’ve still got January and February to go so I hope it holds out. If we run out it’s going to be electric space heaters to keep warm with and that will jump the electric bill way up there. But with Cherie working money won’t be as tight so that’s good. Time to get to work so bye now.
Posted by Bob Westbrook at 9:14 AM