Start of another week 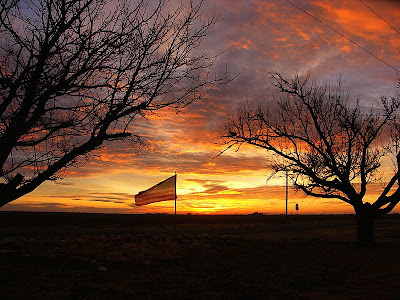 Another great sunrise this morning. Love to include this flag I put up.

12/8/08 Monday
It’s the start of another week. Christmas isn’t far away now. I really don’t like Christmas much anymore. Christmas is for kids, at least in this society it is. The two I helped raise are adults now and Bruce, the oldest, is married. I always regret the distance we now have, one of the prices I’m paying for mistakes of the past.

I called Suzie a few days ago. For those of you who don’t know, she is the daughter of my former secretary who was murdered four months ago. This will be her first Christmas without her mom so will be hard emotionally. Life is so hard for them now because of the poor economy in Toledo, which is directly connected to the automotive crisis. Calvin can’t find work simply because there is no work to be found. He spends days and nights prowling for scrap metal in the alleys and byways of that decaying city when he can get the truck he bought for $300 to run. Fortunately they get food stamps so they can all eat though it’s a lot of mac and cheese type stuff. She has three kids ranging from thirteen to sixteen in age and their father doesn’t pay child support despite having been arrested and put on probation for it. The oldest boy didn’t have a coat but some friends found one to give him. It was two degrees below zero with wind chill on the day I called her. She wanted to get signed up with one of the churches that “adopts” families for Christmas but without a car couldn’t make the deadline.

Cherie and I talked and agreed to send them some money to help despite how tight our funds are. No matter what we are blessed with a house that is paid for and very low bills. Heating with wood helps and electricity here is way less than half of what it is in Toledo, which has one of the highest electric rates in the country. Suzie finally has a car that runs most of the time though it stalls out at lights a lot and scares her to drive it so they don’t have to walk to get groceries or anything else.

Eileen’s son, Bobby, is going to lose the house he inherited from his mother. Their power is often turned off because the bills aren’t paid and they no longer have a phone. It’s sad to watch because many of his problems are a result of his alcoholism. The mortgage lady said it might take ten months before they get escorted off the property. They also have three kids, who are much younger. I can’t remember for sure but think the youngest is seven or eight years old. It really pisses me off that the government is bailing out the banks who hold these mortgages but nothing is being done for the people, the families who are suffering on the street. So the bank gets billions to cover the bad loans and just put it in their pockets and don’t pass it on to the real victims, whom they still go after for the money owed for loans that shouldn’t have been made. How I wish I could bring them all here where they can find work.

Yesterday was a refreshingly bright day for me, with my level of cognizance very high most of the time along with a good energy level. I didn’t have one of those bad headaches either. I’m not doing too bad this morning either so look forward to getting something done. I got much of the workbench done and hope to finish that job. After studying things for a while I’m going to try to mount the chop saw and planer on it in a way they can fold out of the way. That would free up lots of room. Time to move and take advantage of this time of cognizance.
Posted by Bob Westbrook at 8:45 AM