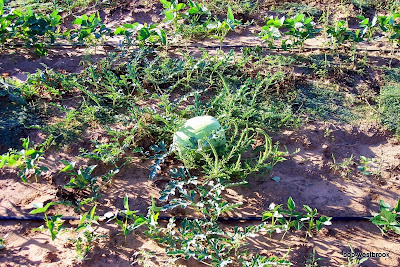 10/1/10 Friday
We’re into October now. My, how fast the time is flying. I just went on a walk around the farm to see what’s happening. It amazes me, the changes that have occurred unnoticed by me. There are weeds two foot tall where there weren’t any a week or two ago. I found a watermelon that is over a foot long that I didn’t know existed. We had taken the single melon that was on that vine off two or three weeks ago, I think. This is a big part of the problem, my memory. With the memory loss comes a difficulty with being able to comprehend time. What I think I did last week could well have been a month or two ago. The watermelon we harvested is still in the refrigerator waiting to be eaten. Is it still good? Because it was out of sight it was forgotten about. We had picked it to take to Linda’s when she’d invited us over to eat, but forgot to take it because it was out of sight and thus out of mind. 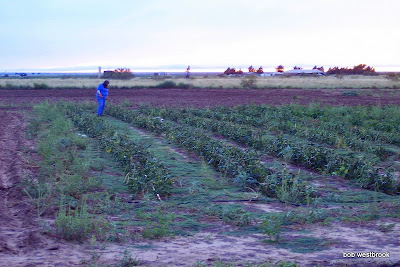 Cherie out in the Blackeyed peas
We had rain recently, don’t remember when but that’s why I keep this journal. I just don’t have the time to go back and read to see when it rained. Point is rain is rare and with it comes lots of growth. Thus the weeds, that seem to have suddenly appeared out of nowhere. It is always hard to see how much I don’t keep up with. Hard, discouraging, and depressing. I was asked recently if I had a job. I do, but it doesn’t pay anything, at least not yet. My job is building this farm and trying to keep up with all the things that need doing around here. I don’t seem to be doing a very good job. If I had a regular paying job then nothing would get done here on the farm and it would be a much worse mess than it is now. Told Ron to pray we get an oil well drilled on the land for that would provide the funds we need to make this a working farm. Till then I’ll keep struggling on. 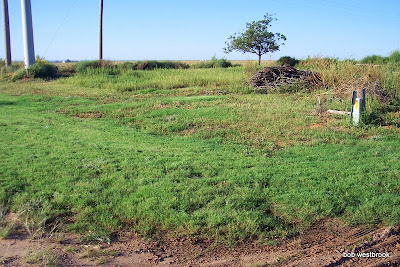 Yesterday I mowed weeds and the few spots where Bermuda grass managed to take root. I pushed the mower as long as I could but eventually it wore me down. It got to the point where just walking around I was basically shuffling along. Pushing a lawn mower when one of your legs doesn’t work good turns into a exercise in futility. I kept going as long as I could but finally had to quit. Last night I had some major leg cramps that were pretty rough. Fortunately, with the paralyzed right leg, I don’t feel very much pain so that made it easier. This morning I’m still shuffling a little as the right leg doesn’t seem too excited about working for me. That’s tough cause there’s lots to do. I’ll push through today best I can. 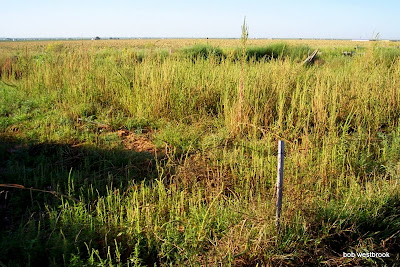 This is where our onions were/are (there's still some in there somewhere) It's just another area I haven't been able to keep up with and the weeds have certainly taken over.

When Ron and Paula were here I wasn’t able to work on the farm much. The nice thing about that is I didn’t have the pain to deal with and didn’t even have to take pain pills, except one in the morning. We took them to Abilene Wednesday for the Torah group and that meeting didn’t end until nearly ten at night so we didn’t get home till a little after midnight. Believe it or not the total of four hours driving did cause an increase in my pain level. Who’d a thunk that sitting causes pain. Working all day yesterday brought back the pain. Those three days with Ron and Paula were a nice break from that. I know I could sit around and thus not hurt but I can’t sit around. Would rather suffer to get to where we need to be than be a vegetable sitting around doing nothing. 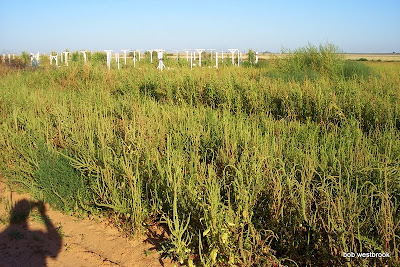 Underneath these weeds is the hundred dollars worth of Bermuda hay seed I sowed. It's coming up well in many places but the weeds are not helping at all. I plan on trying to mow this down with the lawn mower. It's part of what I did all day yesterday and I'll work at it today as long as I can.

Linda just stopped by. We discussed options on remodeling the bathroom. We looked, measured, and talked about what would work and what wouldn’t. Trying to process all the ideas proved too much for me so it triggered a slow down. It’s always embarrassing when I have one of those in front of someone, except Cherie. She’s my loving wife and understands how it is. It’s always nice to have her support. It wasn’t a bad slowdown, just a too much to think about kind of one so it didn’t last long.

For the rest of this journal I’ll post pictures. There’s too much to do (always) so I don’t want to waste a lot of time writing. I will say this though, Janie, if you or Steve read this, I’m praying for you. I love you and so does God but you need to do what is right and talk to me. 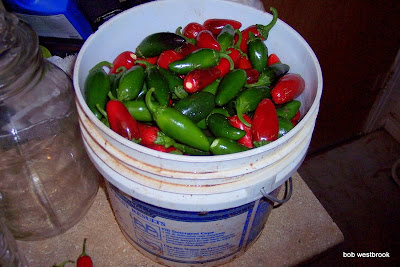 Here's a bucket full of Jalapeno peppers we picked last week. There are many more to come and with the rains the pepper plants have just boomed. It's a night and day difference between the well water and rain water.
1 Corinthians 13:1 If I speak in the tongues of men and of angels, but have not love, I am only a resounding gong or a clanging cymbal. 2 If I have the gift of prophecy and can fathom all mysteries and all knowledge, and if I have a faith that can move mountains, but have not love, I am nothing. 3 If I give all I possess to the poor and surrender my body to the flames, but have not love, I gain nothing. 4 Love is patient, love is kind. It does not envy, it does not boast, it is not proud. 5 It is not rude, it is not self-seeking, it is not easily angered, it keeps no record of wrongs. 6 Love does not delight in evil but rejoices with the truth. 7 It always protects, always trusts, always hopes, always perseveres. 8 Love never fails.

Yeah, I know, you said I sure do “sling” those scriptures, or something like that, but the truth is the truth whether you like it or not. I’ll keep trying to reach out to you anyway I can and if that means hoping you, or someone who knows you, reads this it’s the best I can do. 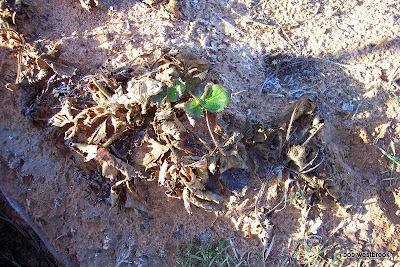 Our strawberry plants are just clinging to life, barely hanging in there. Again the well water is to blame, poisoning the soil. 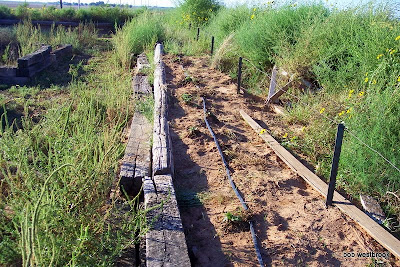 This is the Strawberry raised row. In an ideal world it would be full of strawberries with the vines overflowing down the side. With good water it will happen.
Posted by Bob Westbrook at 9:41 AM