12/24/05 Saturday, Christmas Eve
It’s a bright sunny day and the temperature is expected to be up to 40 degrees. I am running at a 6 this morning but that will change soon enough. Cherie is going shopping. Her mom called and asked if we were going to Columbus. I said yes because I had changed my mind from earlier, when I said I didn’t want to. Then came the next part. Evidently Nate is real sick, running a fever and stuff so Cathy may not drive Mom and Dad to Columbus. Oh yeah. For those who are wondering what’s in Columbus it is where Cherie’s sister lives and the family goes there for the family Christmas get together thing where everyone veils what they really think. Smile!! It’s Christmas. I know that sounds bad but I am jaded about this holiday. It is actually a good thing because it sometimes help this family to understand and accept each other.
Cherie is starting to show signs of the stress she is under but is holding out fairly well. We have lots to prepare for. I tried on the only dark suit I have and learned what I already knew. I’m to fat to fit in any of the pants I owned a year ago. You know, being in a coma, living on $20 a week in St. Louis, and then being homeless as I tried to recover, tends to make you a bit thin. Now with the stress gone and having a kitchen to do the cooking I love I am porking up fast. Anyway, Cherie came out of the closet with a pair of pants she picked up on sale for $4.00. They fit and are nicer than the pants I have with the three piece suit.
We don’t know what to do about our cat, Carman. This caught us at a bad time as I don’t get my government check till the first and we are unsure if it will come because of the VA thinking I am in prison. Our money had been depleted because of Christmas and catching up on bills so it’s tighten things up time. So do we pay to board the cat, or leave eight tons of food out, turn on the water in the sink (which we do anyway) so he will always have fresh water, and put a whole box of baking soda in his litter box?

I have to do the laundry. Cherie was fretting about all the stuff she has to do, which included laundry. I asked twice if there was anything I could do to help, hoping she would ask me to do the laundry but as usual she doesn’t. “I know how to do laundry you know” I told her. She still was not going to share this load as she determines to do everything. I finally convinced her I could handle it so now I must stop writing and go do it.

Fred called and said Barb did not want to go to the store and then said she didn’t feel good so she didn’t want him to visit. This is Christmas. You know, the time of year that dredges up your bad memories and traumas. Who do you miss at this time? Those who have died, those who you no longer see, those you used to share Christmas with but can’t now. This must be tough on Barb. She hasn’t seen her kids in years and there is still a court order prohibiting her from doing so.
Fred wanted to get out anyway so I took him to see his friend Helen. She is one of those grandma’s who cook for days at Christmas. She had some cookies for Fred and surprised me with some also. Then I took him to the Pharm were he stocked up on food knowing we will be gone for about a week. He was not doing well and had trouble breathing. I could tell he was not in good shape when I went to his door and it’s worse now. He seems to get more confused at these times and we had a time getting out of the car. The locks won’t open till I have the motor shut off and Fred is always in a hurry to get out, pulling on the latch making it impossible for me to unlock the door. “Fred, you have to unlock the door” I told him so he started looking blindly for the lock button, jabbing at everything. I was able to unlock the door when he released the handle but the instant I did he found the button and locked it. This happened three times, click-unlock, click-lock, unlock-lock, “Fred, your locking the door. Let me do it” I said. We were able to get out.

I’m home now and called Cherie. She is frazzling out. Been all over and found nothing. She was so bad she stuttered like I do when I’m real slow. She still had stuff she wanted to get but I told her to come home and relax a little. “Make pear bread Cherie. That will help you focus on something other than all this.
Cherie made it home saying “You know what, next year I’m not doing Christmas. This is crazy and I’m so upset I can’t talk”. I calmed her the best I could and then headed out to get Wayne stocked up on food before we leave and to drop off a card and pear bread to Dave. On the way back I called Allen to let him know I won’t be going with him to the Zeph Center. He was not doing well and said he had not slept in three days because of his pain. He said he almost went to the emergency room so I told him to get ready cause I was going to come by and take him there.

Allen seemed to be in bad shape, having trouble walking to the car. I took him to St. Charles because they are closer. There was no one there which is not surprising on Christmas Eve. He had a hard time following what I said so I have to wonder if it was from taking pain meds or because of withdrawals. Probably withdrawals because that causes insomnia. He talked about suicide and broke down crying as he told me of a conversation with his mother and his helplessness to assist her. I need to get him into mental health but he thinks he knows all about depression meds and that they just wak you out.
First Allen had to talk to the intake guy who screens those coming in. He asked Allen what the problem was and Allen started back five years recounting the accidents and injuries he had sustained. By the time he had gotten halfway through this seemingly practiced spiel I interrupted “Basically Allen has beaten himself up and hasn’t slept for days because of pain”. The guy looked appreciative and was able to focus his inquiries better. Allen would repeatedly wander from the subject and go off on a discourse. The intern picked up the phone and said “We have a back and neck pain” reflecting the category he placed Allen in.
We were led to a room where Allen was told to put on a robe. A lady came in with a computer to get Allen’s information. Of course he is in the computer despite not having been in that particular hospital. Then a Nurse came in and started to get into more detail about Allen’s problem. Allen started on a discourse about his not being able to sleep and the guy looked at him with some confusion. “You’re here because you can’t sleep, not for pain?” he asked. Allen got back on his history of injuries, citing wrecks and getting blown up. He had brought the pictures I had taken of his injuries and asked if he should give them to the doctor. I took them from him and said “We’ll see if we need them”. 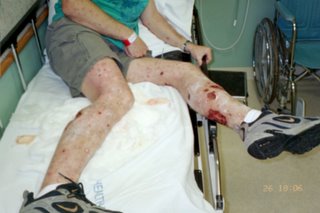 The doctor came in while Allen was getting animated as he talked of his hardships and then got onto the he has a malpractice suit coming for the way he was handled in North Dakota. No No Allen the wrong thing to tell a doctor. This doc had seen so many come in looking to get pain killers that he had Allen pegged from the get go. He listened to him for a while and said “I’ve got lots of people waiting for me so lets get to this”. At some point I saw a change in his demeanor as he realized Allen may really have a problem. The scars on his legs where chunks of flesh had been blown away helped with that. Then he began to examine him and there were a few times Allen’s muscles would just spasm. The doc told Allen he needed to get a family doctor after hearing with disbelief he hadn’t had one in five years. He gave Allen a recommendation to the back and neck department and said that from there he can be referred to pain management.
He did give Allen a few Vicodin after again expressing his reservations. When we left I told Allen he needed to get to Family Services so he could get food stamps and on Medicaid. This will open the doors to a few more doctors than is available to him now with no job or money. I dropped him off and headed home.

That’s it for now guys. We are getting ready to drive to Texas. Virginia called around noon to let us know the funeral will be Tuesday at 2:00. That means we leave on Christmas day (tomorrow) and are a bit rushed. Cherie is packing clothes and I will do the electronics. She is tired and I am wide awake. We will go to Connie’s and spend a short time with them before heading out. Stayed tuned for more. We might be driving right into Peyton Place. Who knows but it will be interesting. Stay tuned to the same “Bob” channel at the same “Bob” time for more of this nonstop excitement.
Posted by Bob Westbrook at 7:55 PM