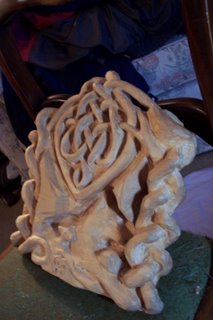 I did get to do some carving. A little bit at a time.

12/16/05 Friday
We’re off on another day. This morning I am sharp and loving it as always. With the seven inches of snow we got yesterday and more coming I wasn’t sure how the roads would be so I told Barb I wasn’t sure about taking them to the church for the food handout. There was some black ice this morning but the main roads were plowed and salted so I decided I would take them.
I was up with Cherie this morning and, knowing I was to meet Jeff, showered and shaved. I went out and started both Cherie’s car and the Caddy and scraped the snow and ice off them. Fred came out when I came back in to see if I was going to pick up Barb. I said I would so he gave me some sliced ham he bought. I know he had bought it for himself and am concerned he is not eating right.
Jeff was doing fine. I got to the Waffle House on time after putting gas in this car and called him to make sure he was going to come on this icy day. When he got here he asked what he always does, “What’s going on with Bob?” I told him things were pretty much the same, that I was taking Barb and them in for food and stuff. I asked if I had told him about the EPA sending me a letter about cleaning up the drums of oil and solvent that were at my former warehouse. I told him that Bruce was in Kuwait and probably would be going into Iraq. We discussed how I miss the boys and that much of that separation is my fault.
We went on to talk about religion and my doubts again. I told him my questions about the Bible, how I had a problem with this concept that it is the infallible word of God because stuff like a woman is not allowed to talk in church or hold an office. To me anything the hand of man touches is tainted with his personal views. Then there is the question of where the modern day Bible came from. It was put together some five hundred years after Christ died and made to fit the ideas of the day.
Right now I am writing this in the Pilgrim Churches parking lot waiting for Barb and the others come out. This time I brought four people here. Besides Barb there is Dawn, Dee, and another lady named Barb who had come the last time. I am not sure what I will do after this.

Well I am back home now. Took a Tums right away because drinking too much coffee gives me an acid stomach. I was doing well earlier but feel a slow down coming. There are all the precursors. A headache is starting, my limp showed back up, and I am starting to have difficulty formulating sentences. (There was something else I was going to list but it’s gone now.)
Fred called and asked me to pick up some two cent stamps if I go out. I hope to go out but it depends on how much I slow down. I took my pill this morning. Maybe I will try that herbal stuff. I keep that at a minimum because it costs so much but it has helped the stress slow downs but doesn’t do as much for the bad ones. I don’t think this one is triggered by stress so it will be interesting to see. I have tried to track the effect of this stuff but keep forgetting to write it down. It is 11:27 and I will take some. Hopefully I will record it’s affects. (What is the difference between affect and effect? I don’t know right now) Headache is climbing fast so will take aspirin and the melt in my mouth migraine pill. Hope it helps. Got to quit writing now. Too hard. Sucks.

It’s 1:07 and I am doing better but only a little. Moved from a three to about a five. It’s good enough I feel safe driving. Allen called so I think I will help him fix something and perhaps stop by to see Eileen. I know she reads the blog so “Hey Weenie, I been wanting to drop by but it never worked out. If I miss you today, sorry”.
I’m burning a CD for Allen. He liked Simon and Garfunkel and I have talked to him about how music can sooth the soul or agitate it so this will help. I think I’ll burn a few others for him later.
Now I have moved from a five to a seven in fifteen minutes so either the aspirin, vitamins, migraine pill, herbal stuff, or the combination of all of them seems to have worked. Time to head out.
Allen was the same as usual. Talking about everything and hard to get along with. No matter what I said he would keep on with his view. I would tell him that he was acting this way and he would argue about that. “I’m just having a discussion. We’re not arguing.” he said. I told him that a discussion requires two people who share and listen. “Allen when I speak you just don’t here me. You act like I am stupid and my opinion has no value”. He argued with that and wouldn’t let it go, refusing to change the subject. At the end he was upset that I had to leave despite the fact I have told him many times that I like to be home by five everyday to see Cherie when she gets off work and enjoy dinner with her.
It is uncomfortable for him to be clingy like that but I understand his loneliness. Unfortunately he will stay lonely unless I can teach him some social skills. Part of the problem I think is from the massive amounts of pain killers he takes. Another factor, I believe, is the brain injuries he sustained in his life. He repeats himself several times during a short period constantly returning to a subject. This is called perseveration and is common with brain injuries. The Zeph Center never called him so I will have to call and put a bug in their ear. Allen needs the mental health help.

I went to pick up the stamps for Fred. He had asked me to get $10 of two cent stamps. I really didn’t think of it till I got up to the counter at the Post Office. “I’d like $10 of two cent stamps” I said. The lady looked a little distressed and said she didn’t think they had that many. Now the math works in my head. Lets see, that would be five hundred stamps. I just got a hundred of them and it took a while to get Fred to understand. When I told him I got 100 stamps he said he would have to get more money for me later. “Fred I’ve got change for you. It only cost $2.00” I told him. Took a while for it to register with him but he got it.

I am tired now. It’s 10:16. I called Weenie after I left Allen’s. It sounded pretty busy over there and she has to go to a couple of funerals, one or both of them tomorrow. I will go see her when it is more convenient. Night all.
Posted by Bob Westbrook at 7:22 PM