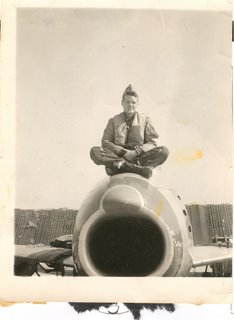 This is a picture of my dad on top of one of the jets he flew as he trained on Webb Air Force base in Big Spring Texas, where he met my mom and where I was born. The only pictures I have of him are scans of old photo's found in my mothers belongings and my grandmother had.


12/17/05 Saturday
It is already 3:00 and I am just now able to get to this journal. Had to reconstruct it first. Not sure when but when I turned on this laptop and brought up the journal I found the same corruption that had attacked it before. Sections of text were changed to a bunch of strange symbols. Come to find out they are listed as “wing dings” on my font menu. Another section looked like it was written in that mid eastern script. The back ups were also corrupted. Some how in all this I dumped the whole thing into the recycle bin and in the process of getting it out lost it entirely. Fortunately I had back up discs but when I put the first one in it was empty and I got that empty feeling you have when it looks like all is lost, everything’s gone, there’s no hope.
Now I began searching and identifying the corrupted segments and looked through the four backup CD’s I found to see the latest date I had. I went to the blog, which is my journal and learned how to copy them back to my laptop. I got a bit confused as I would lose track of the task I was doing but eventually restored this thing. I just made a fresh backup of this. I should make a backup of a lot of stuff.

It is 9:14 now and I am lying in bed watching “The Sound of Music” as Cherie works on sewing stuff for her new machine. There has been much I did today but will have to work on remembering. I took Fred to Honey Baked Ham so he could get a ham for Barb. I will tell of that later.
The movie “Sound of Music” is one that I am sure I saw several times but most of it is new to me. This is a repeat of previous experiences. When I saw the “Wizard of Oz” it was both familiar and strange but it released strong emotions that had been tied to it since I saw it in my youth. Now, as I watch the “Sound of Music” it brings up feelings that are as old as the movie.
Again the analogy I use to describe my memory loss is illustrated. I liken it to a large thousand piece picture puzzle with some of the pieces missing and some scattered haphazardly on the remnant that is still put together. As I watch some is familiar but much is new. The feelings connected to it are strong and I find my self wiping tears off my cheeks. I don’t know when I first saw this movie but it was made in 1965 when I would have been nine.
It must have had a tremendous impact on me as I could relate to the highly disciplined military authoritarian father who showed little if any love. I am sure I pined for a family and a mother and father as portrayed in the movie. As always it is music that releases these memories and emotions. As I watch this movie I am struck by the purity, the goodness of the characters portrayed, the sense of honor and integrity that is rare in this age.

Back on today’s activities. After Fred picked out his ham, making the girl put a couple on the counter for him to pretend to be able to see, he had me take him to Kroger. He bought all kinds of stuff for Barb and had a bounce in his step I haven’t seen in a long time. He would try to think of anything she might need and get it. As he did he asked if I would be willing to take some ham and things to Barb’s house today. He asked as if he was being a big inconvenience to me. I had no problem with that at all and took Fred home so he could sort out the groceries and get on his breathing machine to recover from the two hours he had been out.
I took Fred to Barb’s at about 2:00. I called Dawn to warn Barb I was bringing Fred over. She was happy to see him and seemed to be in good spirits in general. She surprised me with a small gift that she had dug up from somewhere for me. It touched me as she handed it to me like a child, pleased to express her appreciation and watching anxiously to see if I liked it. I was ashamed that I had not thought of Christmas gifts for her or the others I help. While I personally have a great dislike of Christmas I must look at this from a different view. It’s not that I don’t really like to get gifts but that some would be hurt if I didn’t give something to them. I don’t even know where to send my son Bruce his present as he is overseas.
I went to the grocery store to get butter to make oatmeal cookies. Cherie suggested I pick up something for the two days I finally got her to pick for me to cook dinner. By the time I got done I bought $63.00 of groceries. As I went through Meijer’s trying to choose what I would cook and then figure out what I would need. The more I looked and picked out things the more lost I got. I would forget what I was going to get and then forget what I had already put in the cart and would go through it to get back on track. After a bit I gave up and headed out. I passed a candy display and saw a huge box of chocolates for an unbelievable low price. Now the price is believable. The candy sucks.
I never baked the cookies and was a bit slowed down by the store trek. There is more that happened today but it is not available to this brain at the moment.
Posted by Bob Westbrook at 8:47 PM