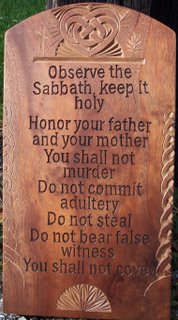 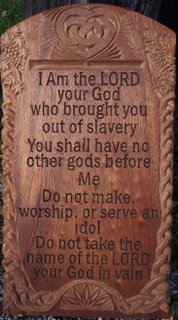 This is another carving I never finished. I was doing it for someone at Cedar Creek Church but lost all interest in carving or doing anything in the depression that followed our being rejected and asked to find another church. We looked for God so we went to church but didn't find Him there.

12/22/05 Thursday
This has been a rough morning. I started out bright and feeling good. Then I started having a slight headache. I told Cherie about it and said it would probably be nothing as I was pretty lucid. The headache kept growing so I took aspirin and then a migraine pill. Headaches are often precursors to the slow downs (partial seizures) but I figured it would just be a headache because I wasn’t slowing down. Not that lucky. Cherie said “I can here it in your voice” when I told her I was slowing down. The migraine grew to the point I went to bed, closed the drapes, and turned the TV off.
As Cherie bustled around doing things I noticed a change in her demeanor. I asked her what was wrong but she didn’t want to tell me. I would ask “Can I do anything? Is there something I can do to help?” but she would say no and keep moving frantically. Finally I got up and stopped her and putting my hands on her shoulders said “What’s going on?” “Nothing” she responded but that wasn’t going work. “Cherie, tell me”. “No, you’ll get mad” she told me as she fought not to cry. I promised her I wouldn’t but it took a while for me to convince her. Now we get to the problem. She had miscalculated and had three insufficient funds charges, that works out to about $90. For us that is allot of money. I understand why she was afraid I would get mad because I did kind of fly off when she had done that before. Now I just loved her and worked to calm her down.
She is worrying about money as she always does. I reiterated that she was to always keep one hundred dollars in the account as a cushion by transferring funds from my savings account. She had been putting that off because the savings account is getting low. Then Cherie reminded me that my pension is in jeopardy because they think I’m in prison. I have known I needed to write them because I can’t count on Lenice to take care of it. I never scheduled it on my calendar so it never happened. As always, if it’s not written down it doesn’t happen.
After that I went back to bed and covered up to wait for the headache to subside. Cherie called me from the kitchen “Honey, you’d better come listen to this”. That didn’t sound good so I got right up. She was holding the phone and said I needed to listen to the message on it. It was the guy from the EPA and he wanted me to call him right back about the fifty five gallon drums behind my old warehouse. This is another thing that I needed to schedule to do and didn’t. Thus it vanished form my mind and would wander in some ethereal emptiness till this rude reminder.
I think I went back to bed but it is not clear now. I know that Cherie cooked scrambled eggs for me but can’t say when exactly. I need to get writing these letters now.
It is 3:00 now. I got the letter to the EPA done and will have Cherie check it over before I send it out. Now I am trying to get the information together to prove to the VA I am not in prison. This is turning into a task as I am still slow. I dug through the mess disguised as a filing system to find paper work that establishes dates and stuff. As I do I see many things that bring sadness. There are things from Cedar Creek Church where we had such hopes, from the scam artist minister Jim Watson, the dreams I had of accomplishing something, and all the records I have since waking up from the coma.
Bill Self just called. He is a pastor at the church we were going to. Cherie asked me to call and let them know we were looking for another church but that’s another thing I didn’t do. We talked for a while and Bill was troubled by me saying I wasn’t comfortable there. I assured him that they were one of the few places we found where people practice what they preached. He is concerned and made sure we knew we were always welcome there.
Barb called while I was talking to Bill. She asked if I knew where she could take three of her cats because they gave an eviction notice to the girl next door because of her dog. Then we talked about her finding a new payee because of the problems she is having with St. Paul. I called the Ability Center to see if they do that but they don’t. I will take Barb to Social Security tomorrow if I am up to it and file a complaint against St. Paul’s and ask for an investigation and audit.
We cleared out our fridge of all the leftovers we always put away for that day known as “later” that never seems to come. I took it to Allen along with a Christmas card, knowing that Christmas season is hard on him. His family is in Maryland and he doesn’t have much contact or a good relationship with some. He appreciated it allot.
That’s all I have for today.
Posted by Bob Westbrook at 6:58 AM