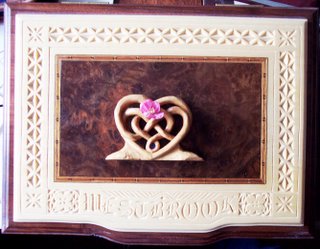 I carved this heart for Cherie's valentine. The box it's on I made for my father, hoping he would like it but he sent it back.

12/4/05 Sunday
When Cherie turned on this laptop and opened my journal this morning she found that there were huge chunks of text that was corrupted. They were full of strange symbols and an occasional happy face with an unhappy smile. It scared her and she was afraid she did it, or that I would be mad, or… a million other thoughts as panic builds up. She heard me wake up and came in to tell me about it, waiting for me to be upset.

It got my attention but I didn’t think it would be too bad. I got up to see what had happened and found a mess. Now I’m worried. I started looking around in this computer to see what was there. In the Journal folder I found two copies of the Word document, two labeled word back up, and about six temporary files. Pulling up the temp files I found they were copies of the journal that were created at different dates. From this I put together the journal.
I seem to be doing quite well this morning. Enjoying being with Cherie and keep getting struck when I look at her. She’s beautiful. It snowed and sleeted last night so we don’t want to go anywhere. Ate a piece of Allen’s brownie and it was very good.

As I write yesterdays account I figured I should stop and tell of what this morning is like. We are happy, laughing, and enjoying. I told Cherie we need to stop laughing when we are kissing as it makes it hard.
When I went back through the journal looking for the corrupted spots I stopped and read several sections. It is amazing how these entries unlock memories and also show what I guess I will call episodes, slow downs and how they affected my performance.
It’s 2:32. I just had another piece of the brownie. It’s still pretty good. Might have another piece in four hours or so. Cherie has gone shopping and Fred just called. He said if I wanted to go anywhere just take off. I almost always call him before I use his car.
I just looked up at Cherie’s screen saver while it scrolled the message I had placed over a year ago. “I WILL NEVER LEAVE YOU OR FORSAKE YOU…..GOD” The only message I seem to be able to get from God is the one I wrote.

It’s 4:46 now. Cherie is fixing some kind of chicken for dinner. She told me what kind but I don’t remember. At least I remember it was chicken.
I finally baked that pecan pie I wanted. It got a little overdone but should be OK.
Posted by Bob Westbrook at 5:53 PM